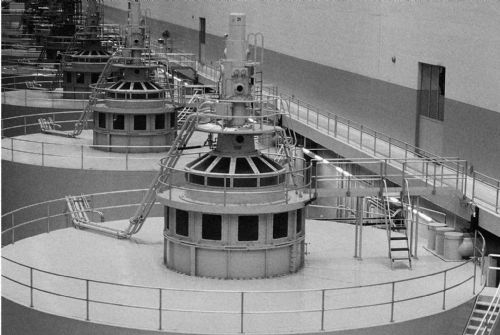 Turbines are the mainstay of various types of energy generation. Up to 80% of power generation involves the use of turbines. Their basic operation is similar in nearly all applications. Turbines require a force to spin the turbine’s blades, which in turn rotate a shaft that connects to an electrical generator. The generator’s spinning shaft will induce changes in an electromagnetic field, which generates electricity.

Industrial turbines can be powered by water, steam, or even combustion. Niagara Falls and the Hoover Dam are examples of hydroelectric power. Water drives the turbines to generate power. In steam turbines a fuel source is used to heat water, creating steam, which then spins the blades. Various fuels are used to generate the heat including coal, oil, trash, geothermal and nuclear. Combustion-driven turbines use exhaust gases to spin the turbines and offer the ability to quickly turn on and off. They’re commonly used in backup generators and in power plants to offer additional load during peak times.

Regardless of it’s "rotation inducing force," as a turbine spins it converts one form of energy into another. The turbine shaft rotates and then either directly or indirectly turns the shaft inside a generator. Inside, the generator coils spin between stationary magnets called field coils. As the coils rotate through the magnetic field they generate electricity. The more coils and the larger the magnets, the higher the current.

Carbon Brushes Take Up The Charge

As the coil builds up it’s charge, the current must be transferred from the spinning assembly. This is where carbon brushes are used. Brushes were once actual wire brushes that engaged with the rotating part of the motor to transfer current. However today wire brushes have been replaced with composite graphite carbon brushes. The advantages of carbon brushes are many including less wear on the slip rings and commutators. They offer more uniform transfer of current and carbon composites provide more options.

It all comes down to a small piece of carbon

No matter how enormous the turbine or generator or how high the current, a carbon brush is used to transfer the current. Enormous, million-dollar turbines and generators eventually rely on this comparatively small part to transfer current to the grid.

Carbon brushes come in all sizes and shapes

Carbon brush grades fall under four main categories: carbon graphite, electrographite, graphite and metal graphite. Brushes may be split and/or beveled and usually include shunts and terminals. But their most important feature is their availability. Power generation is a critical application. So if the brush wears out it needs to be replaced quickly.

Repco stocks hundreds of OEM and equivalent replacement brushes. They also maintain an extensive cross-reference library to find comparable options that are more affordable. If a brush isn’t shown on their website, they will most likely be able to cross index it and provide an equivalent brush.
3
Do you mind if I quote a couple of your articles as long as I provide credit and sources back to your webpage? My blog site is in the exact same area of interest as yours and my users would really benefit from a lot of the information you present here. Please let me know if this ok with you. Many thanks!

2
There are brushless electric motors. Why don&acutet they use brushless Electric Generators?

1
There are brushless electric motors. Why don&acutet they use brushless Electric Generators?