A water pumping station relies on electrical motor replacement parts to move water from a reservoir to irrigate crops in an arid environment. Courtesy – Wikipedia Commons.

You may think water and electricity don’t mix. That’s true, and it’s the reason electrical systems are closed. If current leaves the system, you'll have a ground fault.
Conversely, water pumping systems are open. Water is intended to leave the system. When it comes to water distribution, these two forces of nature get along just fine. Here’s how.

Electrical Contacts Go with the Flow 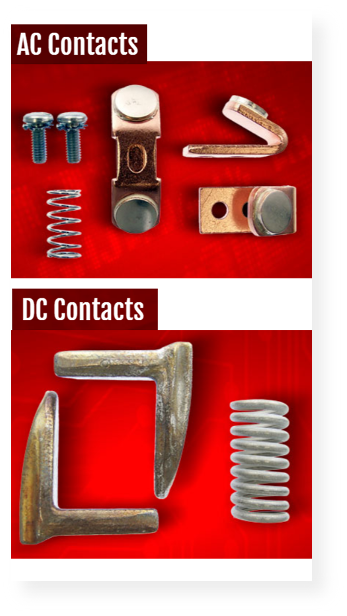 Water pumps are fairly simple devices. Most use impellers and act like “fans” to push water instead of air.  There are more complex pumps, including vacuum or screw pumps, but what they all have in common is a motor driving them.
We’ve suggested electrical contacts that can replace contacts and contact sets from General Electric, Cutler Hammer and Westinghouse.

Just as generic drugs are regulated to offer identical performance to their originals, Repco replacement contacts are designed and manufactured to be functionally indistinguishable from the original.  Repco replacement contacts aren’t lesser quality; they’re simply more affordable.
You can thank water pumps in pumping stations for moving water to your home and irrigating land to grow food that is delivered to your table. Going one step further, your dishwasher’ s water pump finishes the job. Beyond commercial and industrial applications, you can see that settings for pumps and electrical replacement parts hit closer to home. Repco stocks affordable replacement electrical contacts for 28 leading OEMs spanning eighty current and obsolete series.  For more on the science behind how electricity moves water, read Part 2 of this series on water pump motors and electrical replacement parts.