Quarry Vs. Landfill Operators: the Greatest Fight on Earth? 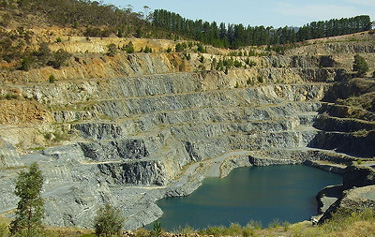 What on earth is clean dirt? Ask landfill operators and quarry operators in Chicago, and they will tell you all about this oxymoron. These interrelated industries see a clear difference, and they are embroiled in a debate over the definition of "clean dirt".
The state’s Environmental Protection Agency has stepped in and is holding hearings to define clean dirt. So what’s this disagreement all about? It turns out that some dirt is cleaner than other dirt, and the two industries use it in very different ways.
Construction companies often own quarries and dig for rubble and other aggregate used to make bricks and other construction material for building roads, bridges and other infrastructure. They have little or no use for dirt that may contain toxic materials, so they take it landfills. Landfill operators are very particular about the dirt they accept since it can impact water, air and wildlife in surrounding communities.
In addition to ecologic issues, there are economic factors when stricter regulation like the Clean Water Act (CWA) is followed. Heavy equipment manufacturers are effectively caught in the middle of the debate. Heavy equipment manufacturing leaders like Caterpillar, Ingersol Rand and Komatsu generate billions of dollars in annual revenue making cranes, hoists and drilling equipment that move the dirt between quarries and landfills. When dirt moves, so does the economy.

There are many aspects to the ecologic and economic issues. Inside the mechanized earth moving machinery are the products of more industries that are impacted. Equipment and components like motors, power supplies and electrical controls keep the dirt moving behemoths moving. These components require ongoing maintenance and replacement. Electrical parts, particularly from the OEM, for a single crane can exceed the cost of the crane over its lifetime. Alternate suppliers of comparable electrical parts like contacts, carbon brushes and coils can make a big difference in the overall cost of ownership.
Industrial motor manufacturers like ABB, Siemens, Eaton and General Electric, who also sell electrical motor and control parts, often compete with smaller companies who focus exclusively on parts and not the manufacture of equipment. These electrical replacement parts companies offer a product that’s equal in performance with less overhead and in turn a lower price tag.

It’s clear that it doesn’t take a PhD to see the impact this debate can have on a number of related industries. Quarry miners and landfill owners will agree, however, that competition and cost-savings define good business; but what is the definition of clean dirt? They’re still figuring out this earthly matter.

Join our email list and we will keep you informed of sales and promotions and other great deals!

What’s Under the Hood of Auto Manufacturing?

A Beginner’s Guide to DC Motors